We are proud that Bradford is a brilliant place to be active and play sport.

We have some of the best countryside in England within the district and on our doorsteps. We have a wide range of sports facilities that have recently been modernised through the building of new schools. This range will soon be enhanced even further by the forthcoming Bradford Metropolitan District Council programme of building new swimming pools and sports centres.

We have a strong voluntary sports framework with a higher proportion of sports volunteers than in other parts of the country and we are also lucky to have professional sports clubs flying the flag for the Bradford district on the national and international stage.

Through the lifetime of the previous "Active, Healthy and Successful" Sport and Physical Activity Strategy a great deal of work has taken place to increase opportunities to be active. The Olympics and Tour de France created a lot of enthusiasm and vibrancy around sports participation which resulted, initially at least, in an increase in activity levels.

We have regular mass participation events across the district encouraging many people to take part in physical activity and sport for the first time. In our schools increased competitive and recreational opportunities, such as outdoor adventure, have been created alongside an increased focus on primary school physical activity provision.

Yet, despite the huge amount of project work that has taken place, it remains the case that not enough people in our communities choose to be physically active on a regular basis. Only around half of our adult population have activity levels within the government's minimum guidelines and, worryingly, over one in three people are inactive, taking part in less than 30 minutes of activity each week.

There is a similar picture for our children and young people. Not enough of our children are active in their Early Years and by the time they reach 9-10 years old, around two-thirds of our children don't meet the current guidelines for levels of activity. Put starkly, Bradford remains one of the most inactive places in the country.

This is having massive implications for our district's health as physical inactivity is now widely acknowledged as the fourth biggest cause of early deaths in this country. The links between physical activity and obesity are commonly known, and we know we have higher obesity rates in Bradford than the England average, but being inactive also contributes to cardiovascular disease, risk of stroke, type 2 diabetes, certain cancers and mental health issues.

We know that physical activity and sport also has an impact on the vibrancy of communities, our economy and our personal safety. We believe that more people being active and playing sport will contribute massively to Bradford being a more healthy and prosperous place to live and work.

In 2015 the Government set out its "Sporting Future: A Strategy for an Active Nation" which was followed up months later by Sport England's "Towards an Active Nation". Both documents clearly set out a change in direction in national policy where the focus is on the impact physical activity and sport has on individuals and communities rather than only raising the numbers of people taking part.

In doing so there has been a shift towards reducing inactivity levels through local planning and implementation. We will make sure our framework and actions are aligned to these national strategies.

We can't make people become active, but we can support them to make that lifestyle choice for themselves. Often that choice is easier and more enjoyable for certain sectors of our communities than others. For example, we know that for many women and girls, disabled people, those on low incomes, often the choice has been a difficult one and as a result we see large differences in activity rates across the district.

It is our ambition and passion, as Active Bradford, that everyone in the district can make this choice to be active on a regular basis.This will require a real focus on the needs and aspirations of individuals; initially supporting people throughout their life to have the physical and mental attributes to be active and play sport, followed by ensuring that accessible and enjoyable opportunities are available and promoted to all.

This requires a collective effort by all those involved to create the right environment and opportunities to enable people to be active.

Active Bradford is a company made up of six members who are committed to working together to increase the number of people being active and playing sport in Bradford.

The following sets out the framework that will help us shape our plans as we move forward to increase activity levels across the district. We will use it to:

• Guide us in our future work through regular development, implementation and monitoring of action plans

• Enable partners and other organisations to set out their own plans and strategies to promote a unified sense of direction for those working, paid and unpaid, across the physical activity and sport sector

• Provide a "check and challenge" for current and future work In drawing up the framework we have considered other national and local strategies related to health, physical activity and sport, and we are confident that we are able to both compliment and contribute to shared outcomes across our region.

The framework sets out our vision and aims alongside six activity areas that we will be working on.

We will be taking a life-course approach to our planning, setting out clearly defined actions that Active Bradford will be collectively focusing on.

Alongside the framework we will be developing a range of measures that we will be using to gauge the levels of activity across the district. This will also enable us to assess physical activity and sport's contribution to the district's Health, Economy and Wellbeing. 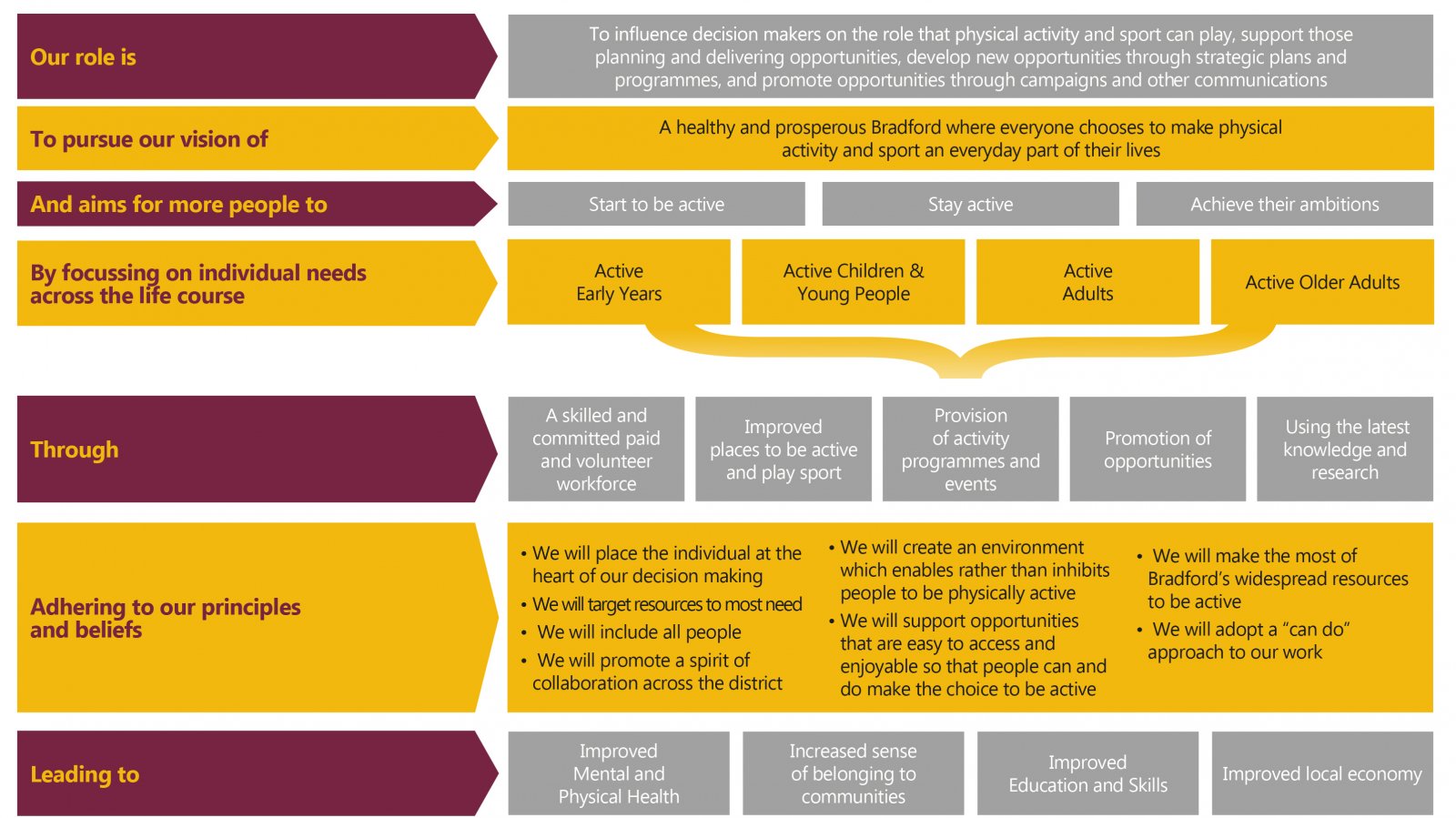 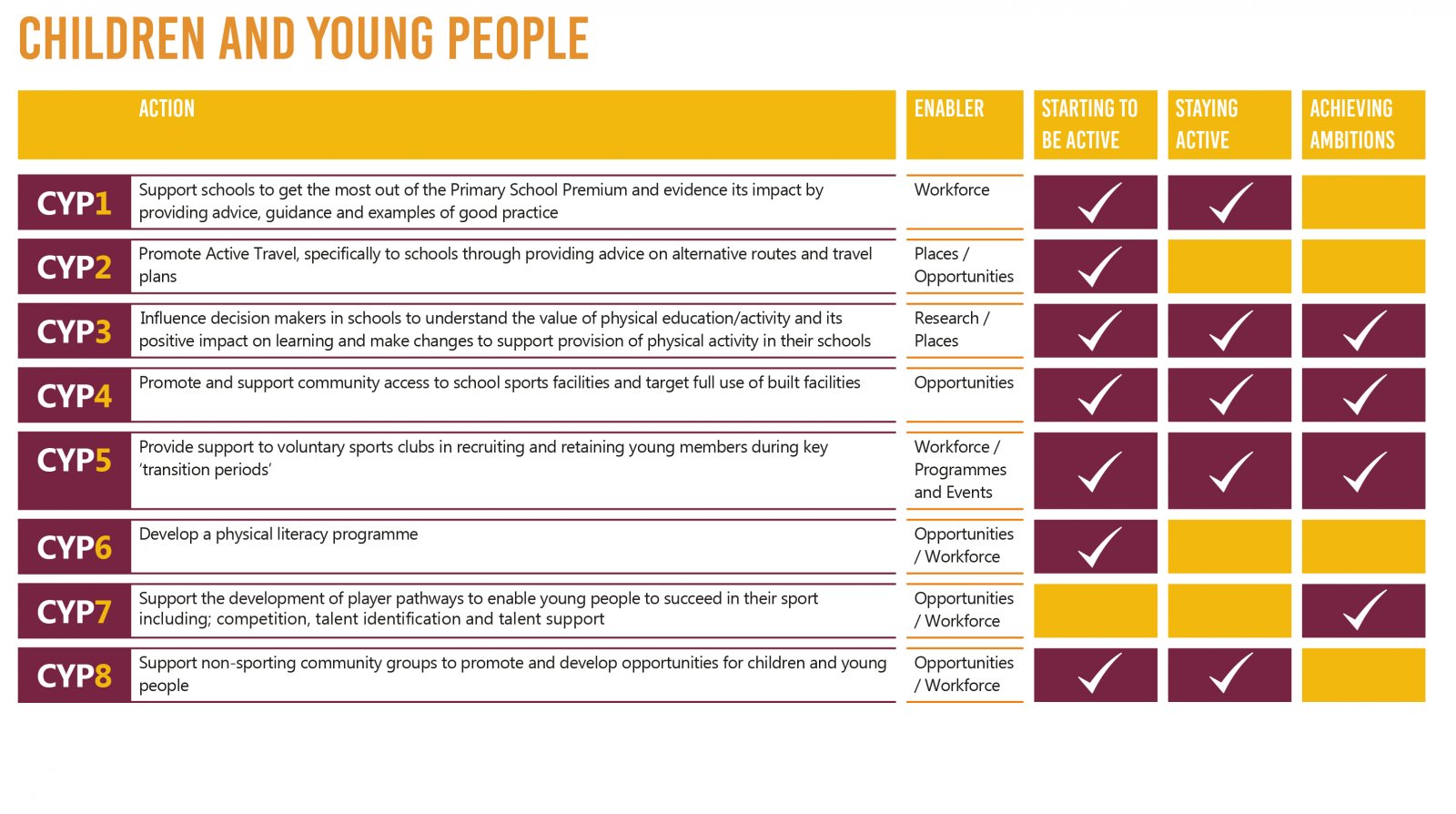 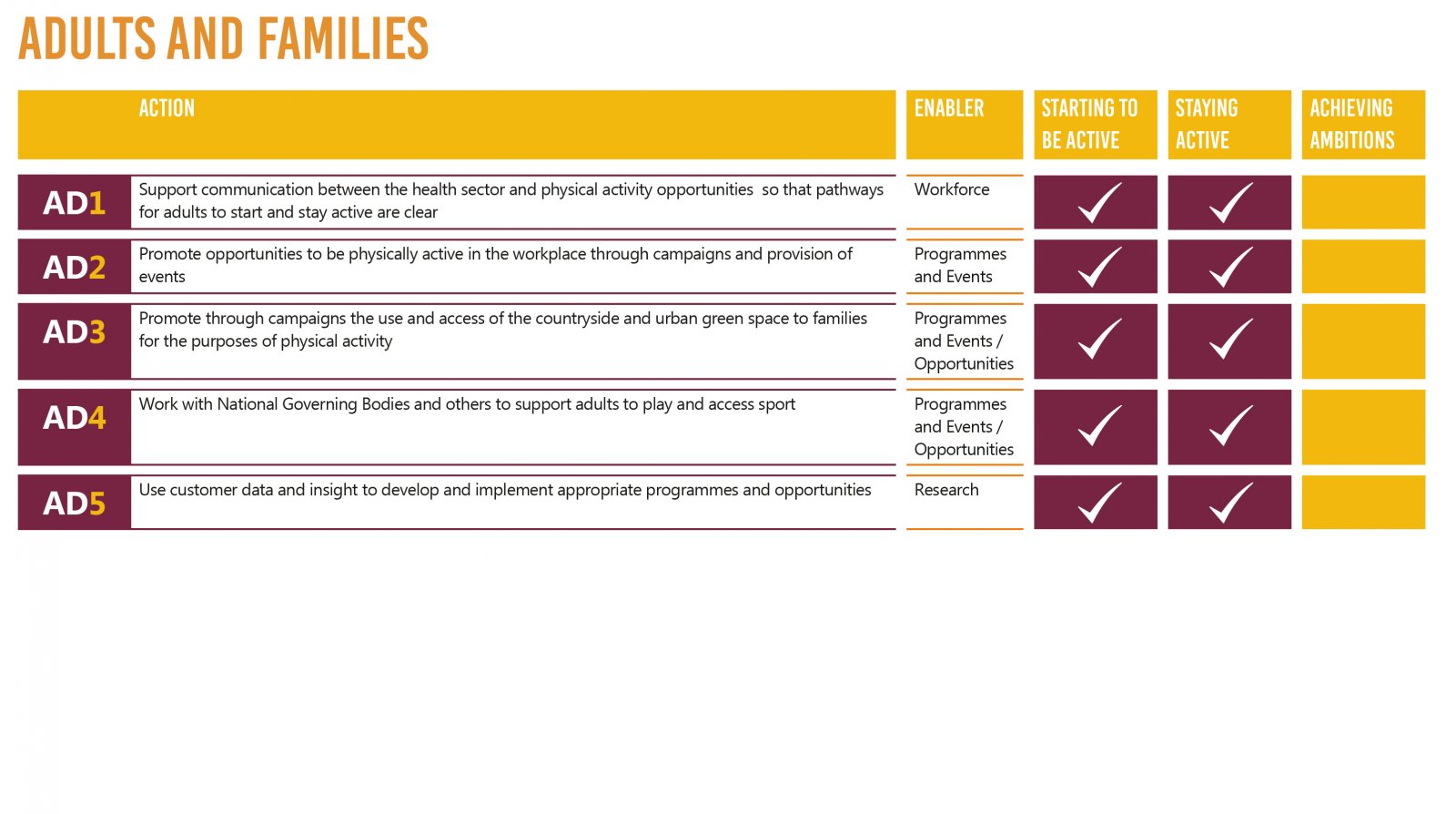 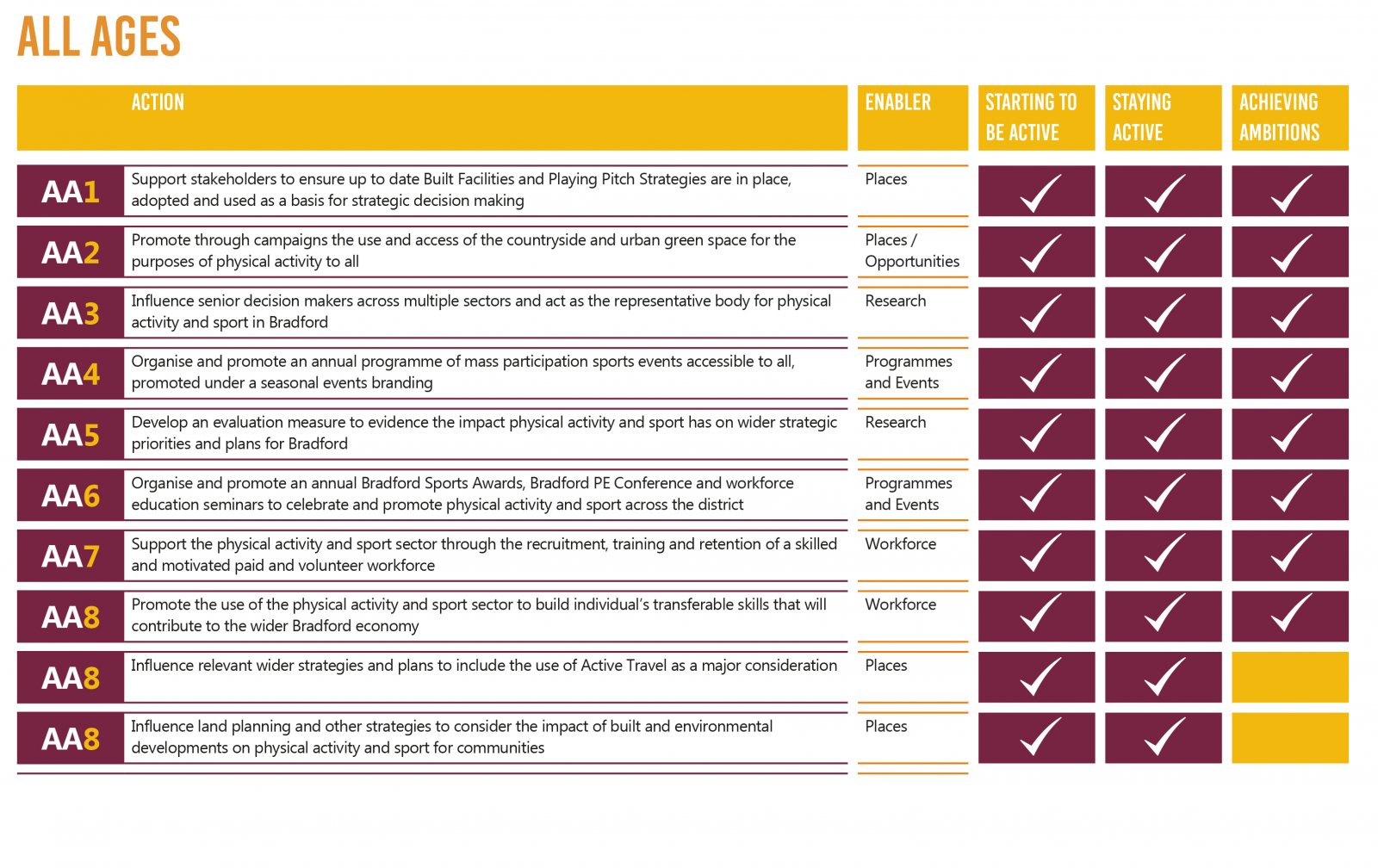 We have considered other national and local strategies related to health, physical activity and sport and we are confident that we are able to both compliment and contribute to shared outcomes across our region.